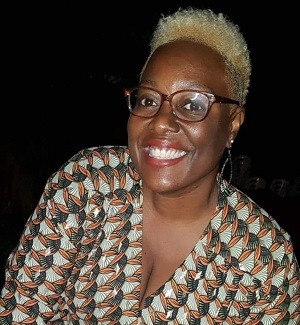 My name is Lysanne Charles, Saba born and raised, St. Maarten grounded, Dutch Caribbean centered and linked extensively to the Caribbean region through family lines that spread up and down the archipelago. I am currently on an artist sabbatical working on several writing projects including 3 children's books, a novel and editing a second memoir of my grandmother Carmen Simmons. I am also an educator working in the areas of Caribbean Studies, Caribbean History, Social Studies and Creative Art. Lastly I am the outgoing Chair of St. Maarten/St. Martin Alliance For Equality (SAFE SxM) and the current Chair of the Eastern Caribbean Alliance for Diversity and Equality (ECADE) Inc. Beyond that I am always busy with cultural and creative projects across Saba and St. Maarten in particular and always available for conversations around matters dear to my heart including the Caribbean archipelago, politics, love, spirituality, family, the arts and activisms around youth, women's, right, LGBTQIA+ and Racial Equality.

I have actually always been pretty politically conscious, having grown up in a family in which politics took center stage. My great uncle Maximilaan Nicholson was always very active in politics when I was growing up, and my great great uncle David Donker had also been involved previously, along with my grandmother Carmen Simmons once heading her own list and my aunt Christina Charles serving as a Commissioner and so on and so on. My brother Vito Charles is also currently an Island Council Member on Saba. So from young politics was a mainstay in conversations at family gatherings and so on. I became active in politics in my early teens on St. Maarten and headed the Youth Wing of the Democratic Party for many years. I would say that that gave me my first real taste of fighting for causes I believed in and engaging with people about that. Later I also ran as a candidate, also candidate number 13, on their list. I decided to join the list of BIJ1 for two reasons, 1) I believe in our mandate and our party platform, which advocates for radical equality and economic justice. For someone who has spent the better part of my adulthood engaged with activisms that seek to do just that this was the only party that made sense for me and 2) I believe in our party leadership and know that with one or more seats in Second Chamber we will already start to have necessary impact and shifts in conversations about our political constellation and matters that impact both the Netherlands and the BES islands and the CAS island countries and this is important. I wanted to participate in the national election because I believe that the tone for Kingdom Relations is set in the Second Chamber and over the years that tone has gotten progressively regressive and needs to change. In addition I could not believe that there exists a Permanent Committee on Kingdom Relations and that there are no Caribbean people in this entity.

I think that people should always be interested in the political processes in their countries, because political participation and political power are just two tools which can be leveraged to make their lives better. I also believe strongly that people should be involved in community organizations and grassroots organizations which are related to their interests so that they are also a part of creating the changes that are necessary within their own communities. Too often we think it is either or, when actually I think it should be a balance of both. Participating in Second Chamber elections is uber important, because this is the body that sets the tone for Kingdom Relations and I cannot say that enough. It is high time that islands, which have also given so much to this Kingdom over the centuries, is spoken about better, negotiated with better and treated as equal partners in this political constellation.

I am championing the following three issues

- A radical equality and economic justice throughout the Kingdom; especially around social minimums, cost of living and health care

- Dismantling of the colonial hierarchies whose legacies continue to have impact in the Kingdom particularly around language, race, place of birth, etc.

- Self - Determination and inclusion in decision - making processes at highest level for all inhabitants, including those of the Dutch Caribbean