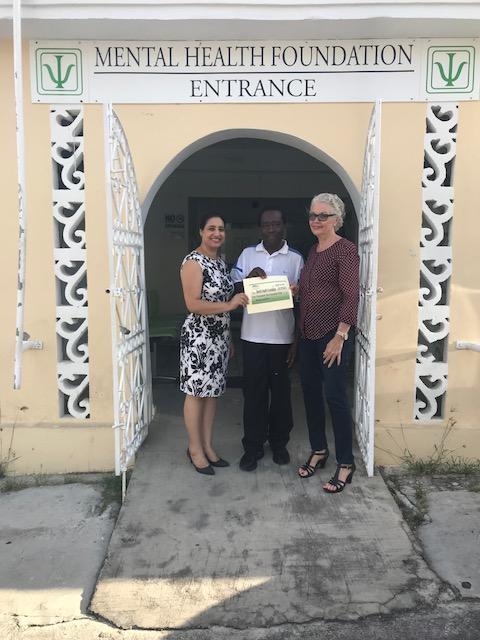 The two organizations for mental health on St. Maarten, Mental Health Foundation and Turning Point Foundation for Drug Rehabilitation, each have received a 2,250 dollar donation from The Quill Foundation yesterday.In his formal address, Kenneth Cuvalay thanked all the people in the Netherlands who donated generously and those who actively supported the campaign. The donations came entirely from individuals working in the mental health care sector, and family and friends of board members of The Quill Foundation.

Cuvalay praised the courage and determination of the staff of Mental Health Foundation as well as Turning Point who despite the fact that hurricane Irma impacted their homes, families, and professional lives, persistently continued to support a vulnerable group in society, carrying out house visits, responding to emergency calls and even raising money for food and water support.The support for both institutions will also benefit St. Eustatius and Saba, Cuvalay emphasized. Clients from these islands are regularly sent to St. Maarten for acute care and long-term clinical treatment.

The Quill Foundation will continue raising funds for Mental Health Foundation and Turning Point. "We are currently investigating the possibilities of a fundraising conference on mental health in the Caribbean in the Netherlands", Cuvalay explained. "The conference will at the same time be a follow up on my farewell symposium in July 2017." Cuvalay retired from his function as health care manager at Mental Health Caribbean in that month.

"The donation from The Quill will be used to support our clients who most need it", both director Healy and Arndell said.